About Us » Henry Eissler

From Steve Strelich and his Stadium, by Gilbert Gia: 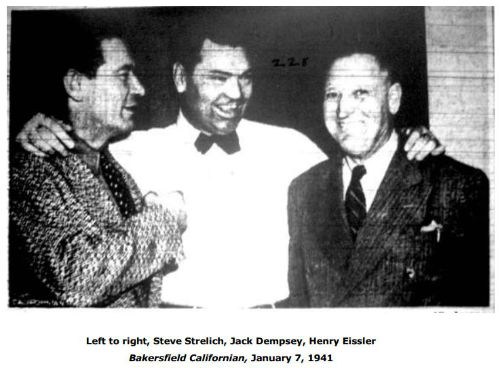 In late 1940, heavyweight boxing champion Jack Dempsey toured a new sports arena on V Street and announced it was the best little stadium he’d ever seen. Henry Eissler built the stadium adjacent to Highway 99, which in those days curved around the northern part of town.

But Bakersfield was not Eissler’s first home. Back in 1900, the Indianan moved to San Francisco to establish a law practice, but after the great earthquake of 1906, he returned to Indiana and there married Mary Sargent. By 1909, the couple was living in Bakersfield, and there Eissler was erecting oil derricks for Fred Gribble Construction on the Kern River Field. In 1911, Eissler was vice-president of Bakersfield Mutual Building and Loan Association, and by 1915 he had his own construction business.

Over the next 25 years Eissler built several schools and hundreds of homes in Kern County, and his name appears on more than 700 documents at the Kern County Hall of Records. In 1926, when Charles Bigger designed a new building on Eye Street for the Bakersfield Californian, Henry Eissler was the contractor. In 1927, Eissler built Jastro Memorial Bandstand at Jastro Park.

Eissler partnered with professional wrestler Steve Strelich, made him manager of Eissler’s stadium, and a few months after the grand opening the sign read “Strelich Stadium.”